For a big mass of air, the Earth’s upper atmosphere is a complicated place.

The changing seasons cause temperatures and pressures to rise and fall, altering the characteristics of the planet’s atmospheric layers, sometimes dramatically. Atmospheric models go a long way to predict how changing atmospheric conditions affect the planet’s climate, but there are so many factors that go into these equations that scientists are constantly double-checking whether predicted results match what they observe.

They don’t always agree at first. One recent, surprising result prompted atmospheric scientist Terry Deshler of the University of Colorado at Boulder and his team to travel to Antarctica during the cold, dark austral fall to measure stratospheric aerosols and polar stratospheric clouds using instruments mounted to large helium balloons. 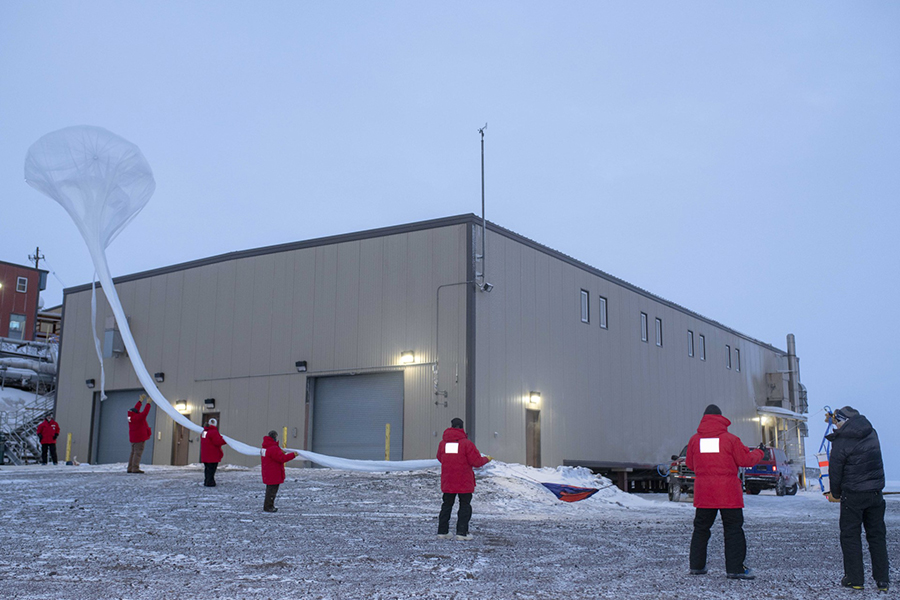 Photo Credit: Tom Reese
Next to the water treatment facility at McMurdo Station, the science team inflates a balloon to carry their particle counters into the upper atmosphere.

“We saw a rather regular feature of an enhanced layer of small particles at about 25 kilometers in the stratosphere [in August and September],” Deshler said. “The surprise was the model also predicted a not as significant feature, but a similar kind of feature in the austral fall, so the April and May timeframe.”

There in their computer model, at a time of year when they shouldn’t be there, was a mass of newly-formed aerosols, tiny droplets of condensed water and sulfuric acid that hang in the upper atmosphere. This predicted particle layer could dramatically affect their atmospheric models, so the team needed to check it out. However, when the team flew their instruments over Antarctica during the austral fall of 2019, that model-predicted layer was nowhere to be found.

“We didn’t see that particle layer in the austral fall,” Deshler said. “The measurements of that part of the project didn’t agree with what the model run in 2010 predicted.”

After failing to detect the particle layer, the team returned home to review their calculations. With the newly collected data as a guide, they made a few updates to their model to better reflect the initial conditions they measured in 2019 and reran their simulations. This time, the updated model matched what they saw in the sky, there was no autumn particle layer.

“When the model was rerun, it more or less agreed with the measurements,” Deshler said.

Making sure atmospheric models are as accurate as possible is an important and ongoing effort for researchers working to refine climate predictions. Scientists often have to go to great lengths, even to the ends of the Earth, to capture the raw data needed.