Ocean Plastic Put to a Better Use

The Washed Ashore nonprofit collects garbage on the Oregon coast and creates sculptures of animals whose health is endangered by the trash they are made of.

Angela Haseltine Pozzi stands shoulder to shoulder with Cosmo, a six-foot-tall tufted puffin, on a cliff overlooking the blustery Oregon coast. It is January and the deadly king tides have come to Coquille Point, making the shoreline look like churning root-beer float. 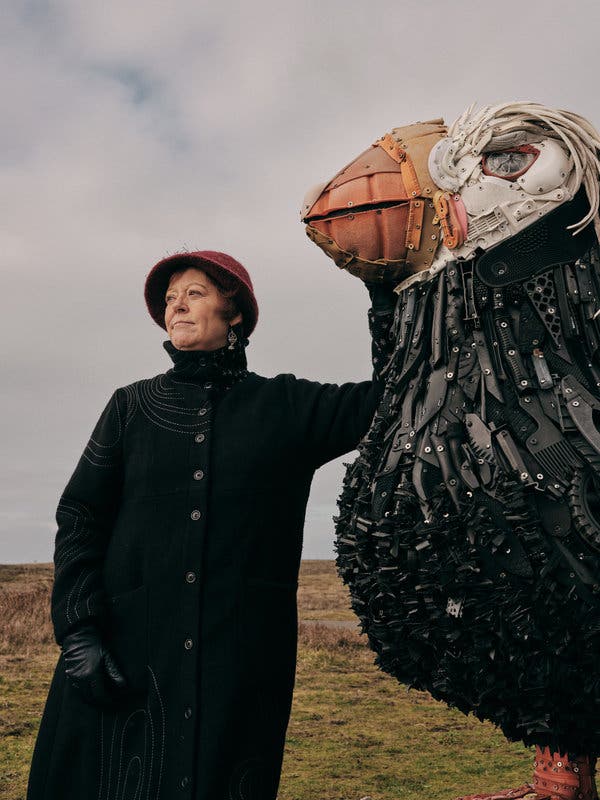 Cosmo endures the weather just fine, as he is composed of plastic that has washed ashore — flip-flops, bottle caps, toy wheels, cigarette lighters — all mounted to a stainless-steel frame and bolted to concrete. The puffin is a sculpture from Ms. Haseltine Pozzi’s art and education nonprofit, Washed Ashore, whose tagline is “Art to Save the Sea.”
“We’ve cleaned up 26 tons off the beaches,” Ms. Haseltine Pozzi said, “which isn’t a dent in the actual pollution issue, but we’re doing something by raising awareness and waking people up.”
“We’re not here to blame anybody or to point fingers,” she said of ocean pollution. “We basically invite the Buddhists and the Baptists, and the rednecks and the hippies, and the Republicans and the Democrats, and they all sit around the table and they all work together on something, which doesn’t happen enough in our world.”
Washed Ashore has taken those 26 tons of garbage, all debris that washed up on the Oregon coast (the majority within 100 miles of Bandon), and built 70 large-scale sculptures and counting, including Octavia the Octopus, Edward the Leatherback Turtle and Daisy the Polar Bear.
The nonprofit’s plastic menagerie — all animals whose health is endangered by the trash they are made of — is in its 10th year. It has gone on display across the country, from the United Nations Plaza in New York and the Smithsonian National Museum of Natural History in Washington to the Tulsa Zoo. Disney and SeaWorld have also commissioned sculptures.

Currently, the “ocean ambassadors” are on view at the Oregon Zoo in Portland, the Oakland Zoo in California, and the Florida Aquarium in Tampa.

Ms. Haseltine Pozzi — who is the founder, executive director, artistic director and lead artist — also travels to train venue staff and docents in a curriculum designed in partnership with the National Oceanic and Atmospheric Administration.

NOAA estimates that eight million metric tons of plastic end up in the ocean each year. Marine animals become entangled in it or ingest pieces they mistake for food, such as the whale that recently washed ashore in Scotland with 220 pounds of debris in its belly — the same weight in plastic an American throws away annually.